There has been a long transition period but many manufacturer’s have now adopted and applied the new standards. Here we cover the main updates from the EN 388:2003 to EN 388:2016 standards.

The EN 388:2016 standard for protective gloves covers; abrasion, blade cuts, tearing, puncture and impact. The level of protection is now shown as a combination of up to six numbers and letters under a pictogram (see example below). 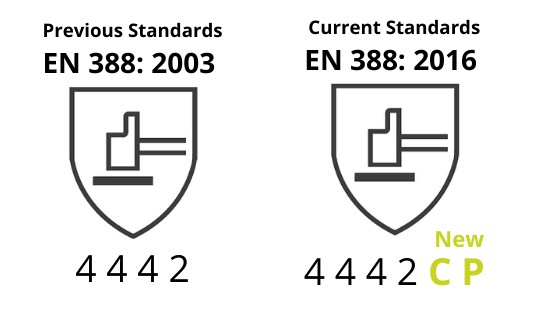 If a test isn’t applicable then a X may be displayed instead of a rating.

The new EN ISO13997 Cut TDM-100 Test improves the accuracy of cut performance data. For gloves that achieve a rating higher than 'A' under the new standards you may see an 'X' displayed for the Cut (Coup Test) as this test isn’t typically applicable for gloves achieving a rating between 'B and F'.

Gloves that achieve a 'B to F' rating in the TDM test will generally have returned a result in the the Coup test where the test blade becomes blunted. Hence the TDM result provides a more accurate measurement and superceds the Coup test result.

When buying gloves the new 'A-F' rating should be referenced but a direct comparisons to the old 1-5 cut levels can be difficult. For example under the new ISO13997 test, gloves previously rated as cut level 5 from EN 388:2003, could now be classified as a level 'C/D' or in some cases even a 'B'. However as glove manufacturers apply the new standards remember that if a type of glove met your needs before, its performance hasn’t changed, but only the method of testing. 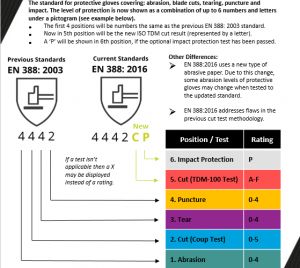 For further information on EN 388:2016 standards Download our simple three-page guide which outlines:

Get out latest catalogue & promotions