A Short History of Gripple

A Short History of Gripple

Gripple are one of our key suppliers, with many labour saving products and an intriguing history.

The History of Gripple

If you think for a moment about joining two wires, there are a number of ways you can do it. You could twist them together by hand, you could solder, clamp the wires between two plates a nut and bolt, or thread the ends of the wire and use a double ended nut. The former methods make keeping the wire under tension difficult, while the latter require tools and skill. For something like repairing a wire fence in a field full of livestock, what would be ideal is a simple device that can join two wires and add the right amount of tension and, ideally, use only one hand. Enter one of the most brilliant yet simple inventions of the 20th century.

An Idea is Born

In 1985, wire salesman Hugh Facey found himself talking to a customer on a wet, Welsh hillside. The customer was bemoaning the very problem of joining wires on fencing, no doubt a common challenge when attempting to shepherd a large flock of sheep. The farmer didn’t particularly want to spend hours tying makeshift knots in wires and trying to get the tension right. Nor did he want to fiddle with spanners and bolts, especially in winter. As so often happens, need is the mother of invention and Facey went back to his offices in Sheffield with an idea burning in his mind. It took a couple of years’ worth of careful development and planning to get the Gripple joiner exactly right, but the result speaks for itself.

So What Is a Gripple?

What he came up with was, at once, astonishingly effective, and breathtakingly simple. It solved every problem the farmer had identified at a stroke. The name, in case you were wondering, comes from the fact that it both grips, and pulls the wire. The Gripple joiner is a small (you could hold several in your hand) self-contained device containing a tiny magic spell. OK, that’s a lie, it’s two spring loaded ball bearings set at just the right angle that when the wire moves into the device it is gripped tightly. Once two wires are in you can increase the tension without using any tools. If you overtighten there is a small release mechanism allowing you to loosen it again.

Without going into an inordinate amount of detail, you may surmise that the product was a success. In fact, before the first prototype had even been tested, there was a commitment from an Australian company ‘BHP’ to market the product in Australia, resulting in, among other things, Gripple wire joiners being used to repair and maintain the three-and-a-half-thousand-mile Great Dingo Fence. It is also unsurprising that invention of a simple one-handed item for joining wires was never going to be limited to just connecting wire fences together on sheep farms. Gripple added products to the range including joiners for larger wires, two-ply barbed wire, and then for steel cable.

By the end of the nineties Gripple products were being used more and more in the building services sector for suspending M&E, HVAC services, such as pipework, cabling and ductwork. The fact that Gripple kits are so light weight plus the speed of installation make Gripple solutions a huge time-saver for the construction industry. Gripple have continued to add to their range with new innovative products from specialist end fixings to Fast Trak, all with speed and simplicity for the installation of building services in mind. Gripple products can be found in such locations as New York’s Yankee Stadium, the Atlantis Hotel in Dubai, and indeed in Hillsborough college in their home-town of Sheffield.

brilliantly simple yet effective invention that came about because of a chance conversation followed by a lot of hard work and persistence. Nor is it the fact that it was invented in the UK and remains a British business success story in a city like Sheffield which has seen its fair share of industrial setbacks. The thing we were really impressed by when researching the product some time ago was the way the company is set up. Although Gripple Ltd. and another company Loadhog Ltd. , founded in 2003, are fairly conventional set-ups, Hugh Facey wanted to ensure that employees would feel proprietorial about the company they worked for and would benefit long term from the association.

In 2011 he set up GLIDE (Growth Led Innovation Driven Employee) Co. Ltd. The set-up of this led to the policy that all employees must buy at least £1,000 of shares within one year of joining a GLIDE member business. By encouraging those who works for GLIDE Co. Ltd. to invest in a stake in the success of the company it means everyone is more positively motivated towards that success, and equally, everyone is rewarded fairly for the effort they put in.

So, with the company having celebrated its 30th birthday in 2019, and expanding into new countries and territories, with innovative new products and new applications for old products being developed on an ongoing basis, it looks like Gripple is here to stay which can only be a good thing. 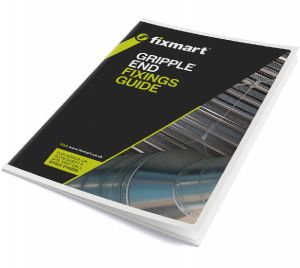 For further information explore our Gripple range, or download our guide covering the various types of end fixings available with Gripple kits. Produced in association with Gripple the guide focusses on each end fixing, their application, dimensions, installation methoid and safe working load.

You can also see how easy it is to suspend building services such as pipework, ductwork, cable containment etc. using Gripple kits in this video.

We’ll still be open for you!

Get out latest catalogue & promotions