Fixmart supplied the Kings Cross project with the Framo 80 modular system, used as wall-to-wall supports from which services and ceilings were suspended. 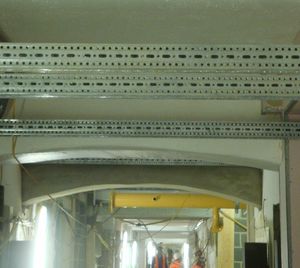 Framo 80 is a multi-functional non-welded support system for the modular construction of framing solutions and was preferred for its versatility, labour saving properties and safe working benefits, as opposed to a traditional hot-worked steel structure. The 80 x 80mm box section with high torsion resistance allowed for strong volumetric carcasses in both construction and process industry applications and offered up to 80% weight saving compared with traditional steelwork profiles.

Being one of Fixmart’s London Underground approved product ranges the Framo 80 system proved to be a perfect solution to the particular problems faced on site. With a back up support service providing full indemnification and guaranteed quality.

Having the stocks readily available and providing the back up support that Vinci required played a key part in successfully completing the job on time and ensured that the contractors saved on potential labour costs that would have been incurred if other methods had been used.